You are here: Home / About The MCLP / Reading List

If you are interested in the background of our Philosophy and Ideology, the following books have a lot of great information, and we highly suggest you read them.

Introduction to the Libertarian Party: For Democrats, Republicans, Libertarians, Independents, and Everyone Else 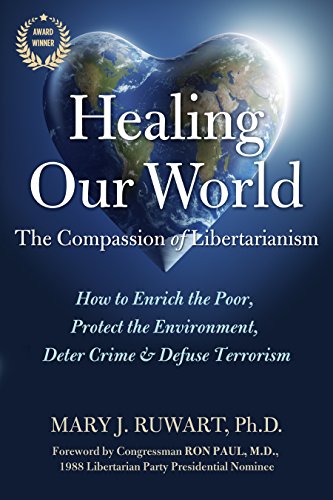 Healing Our World: The Compassion of Libertarianism

Through its win-win approach, Healing Our World illustrates how the rules of social interaction which we learned as children hold the secret to universal harmony and abundance.

Basic Economics: A Citizen’s Guide to the Economy

Basic Economics is a citizen’s guide to economics for those who want to understand how the economy works, but have no interest in jargon or equations. Sowell reveals the general principles behind any kind of economy-capitalist, socialist, feudal, and so on. In readable language, he shows how to critique economic policies in terms of the incentives they create, rather than the goals they proclaim. With clear explanations of the entire field, from rent control and the rise and fall of businesses to the international balance of payments, this is the first book for anyone who wishes to understand how the economy functions.

Economics in One Lesson: The Shortest & Surest Way to Understand Basic Economics

Henry Hazlitt’s Economics in One Lesson is a classic economic primer. But it is also much more, having become a fundamental influence on modern “libertarian” economics of the type espoused by Ron Paul and others.

Considered among the leading economic thinkers of the “Austrian School,” which includes Carl Menger, Ludwig von Mises, Friedrich (F.A.) Hayek, and others, Henry Hazlitt (1894-1993), was a libertarian philosopher, an economist, and a journalist. He was the founding vice-president of the Foundation for Economic Education and an early editor of The Freeman magazine, an influential libertarian publication.  Hazlitt wrote Economics in One Lesson, his seminal work, in 1946. Concise and instructive, it is also deceptively prescient and far-reaching in its efforts to dissemble economic fallacies that are so prevalent they have almost become a new orthodoxy.

Many current economic commentators across the political spectrum have credited Hazlitt with foreseeing the collapse of the global economy which occurred more than 50 years after the initial publication of Economics in One Lesson. Hazlitt’s focus on non-governmental solutions, strong — and strongly reasoned — anti-deficit position, and general emphasis on free markets, economic liberty of individuals, and the dangers of government intervention make Economics in One Lesson, every bit as relevant and valuable today as it has been since publication. 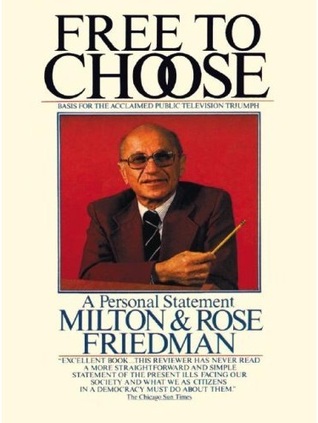 Free to Choose: A Personal Statement

A powerful and persuasive discussion about economics, freedom, and the relationship between the two, from today’s brightest economist.
In this classic discussion, Milton and Rose Friedman explain how our freedom has been eroded and our affluence undermined through the explosion of laws, regulations, agencies, and spending in Washington. This important analysis reveals what has gone wrong in America in the past and what is necessary for our economic health to flourish. 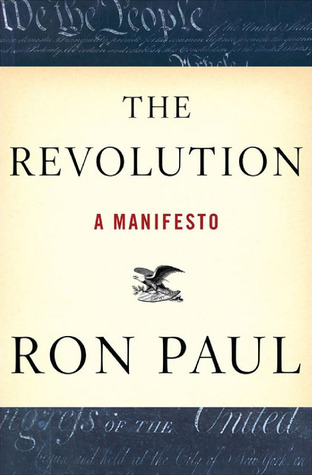 The Revolution: A Manifesto

This Much Is True: You Have Been Lied To

· The government is expanding.
· Taxes are increasing.
· More senseless wars are being planned.
· Inflation is ballooning.
· Our basic freedoms are disappearing.

The Founding Fathers didn’t want any of this. In fact, they said so quite clearly in the Constitution of the United States of America. Unfortunately, that beautiful, ingenious, and revolutionary document is being ignored more and more in Washington. If we are to enjoy peace, freedom, and prosperity once again, we absolutely must return to the principles upon which America was founded. But finally, there is hope . . .

In THE REVOLUTION, Texas congressman and presidential candidate Ron Paul has exposed the core truths behind everything threatening America, from the real reasons behind the collapse of the dollar and the looming financial crisis, to terrorism and the loss of our precious civil liberties. In this book, Ron Paul provides answers to questions that few even dare to ask.

Despite a media blackout, this septuagenarian physician-turned-congressman sparked a movement that has attracted a legion of young, dedicated, enthusiastic supporters . . . a phenomenon that has amazed veteran political observers and made more than one political rival envious. Candidates across America are already running as “Ron Paul Libertarians.”

“Dr. Paul cured my apathy,” says a popular campaign sign. THE REVOLUTION may cure yours as well.

For a New Liberty: The Libertarian Manifesto

A classic that for over two decades has been hailed as the best general work on libertarianism available. Rothbard begins with a quick overview of its historical roots, and then goes on to define libertarianism as resting “upon one single axiom: that no man or group of men shall aggress upon the person or property of anyone else.” He writes a withering critique of the chief violator of liberty: the State. Rothbard then provides penetrating libertarian solutions for many of today’s most pressing problems, including poverty, war, threats to civil liberties, the education crisis, and more.

The next set of books are for people who have a good foundation in Libertarian principles, but want a deeper understanding, and are interested in how and why the Philosophy and Ideology would work in our society.

The term “liberalism” comes from the Latin word liber meaning “free.” Mises defines liberalism as “the liberal doctrine of the harmony of the rightly understood interests of all members of a free society founded on the principle of private ownership of the means of production.” This book presents the theoretical and practical arguments for liberalism in the classical tradition.

The foundation of liberalism, Mises says, rests on an understanding and appreciation of private property, social cooperation, the freedom idea, ethics and morality, democracy, and the legitimate role of government. Liberalism is not a political party; it is a system of social organization. The liberal program aims at securing equality under law and freedom of opportunity for everyone to make their own choices and decisions, so long as they do not interfere with the equal rights of others; it offers no special privileges to anyone. Under liberalism, the role of government would be limited to protecting the lives, property, and freedom of its citizens to pursue their own ends and goals. Mises is more specific here than elsewhere in applying the liberal program to economic policy, domestic and foreign. Also in this book, Mises contrasts liberalism with other conceivable systems of social organization such as socialism, communism, and fascism.

How I Found Freedom in an Unfree World: A Handbook for Personal Liberty

In 1973 Harry Browne sent a simple message — that you can live the life you want to live. 40 years after the publication of How I Found Freedom in an Unfree World, it is now being reissued in digital format — to reach the millions of people around the world that are still seeking a point of view that is as refreshing, and liberating as it was when it first appeared on the scene.

Freedom is the opportunity to live your life as you want to live it. And that is possible, even if others remain as they are.

If you’re not free now, it might be because you’ve been preoccupied with the people or institutions that you feel have restrained your freedom. I don’t expect you to stop worrying about them merely because I suggest that you do.

I do hope to show you, though, that those people and institutions are relatively powerless to stop you — once you decide how you will achieve your freedom. There are things you can do to be free, and if you turn your attention to those things, no one will stand in your way. But when you become preoccupied with those who are blocking you, you overlook the many alternatives you could use to bypass them.

The freedom you seek is already available to you, but it has gone unnoticed. There probably are two basic reasons you haven’t taken advantage of that freedom.

One reason is that you’re unaware of the many alternatives available to you. 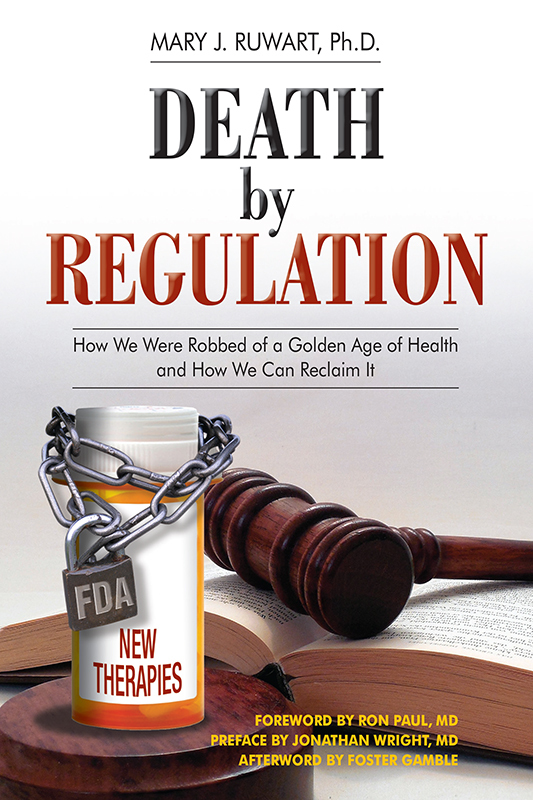 Death by Regulation: How We Were Robbed of a Golden Age of Health and How We Can Reclaim It

You’ve likely had 5-10 years shaved off your lives by the most deadly regulations of all—the 1962 Amendments to the Food & Drug Act. This “living law” continues to reshape our health care paradigm by censoring life-saving information about nutrients, delaying the entry of life-saving drugs into the marketplace, and slashing innovation in both prevention and treatment of disease. Learn how to reclaim the Golden Age of Health that should have been yours! 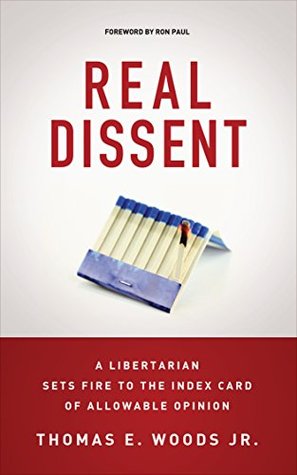 Real Dissent: A Libertarian Sets Fire to the Index Card of Allowable Opinion

Nothing makes traditional left and right kiss and make up faster than when they’re faced with an articulate libertarian. Avert your eyes from this dangerous extremist, citizen! Government is composed of wise public servants who innocently pursue the common good!

In Real Dissent, Tom Woods demolishes some of the toughest critics of libertarianism in his trademark way. In doing so he strays beyond what he calls the index card of allowable opinion, the narrow range within which the media and political classes permit debate to take place in America.

In foreign policy, Americans are permitted to choose between bombing a despised country or starving its people to death. You favor peace? Why, you must be an “extremist”!

On the Federal Reserve, the debate is over which policy the Fed should pursue. But what if the Fed is itself the problem? No answer, because the question isn’t raised.

The index card of allowable opinion forces Americans into narrow and pointless debates, and closes off discussion of plausible and humane alternatives. For the sake of American liberty, it’s time we set that thing on fire.

This book is a match. 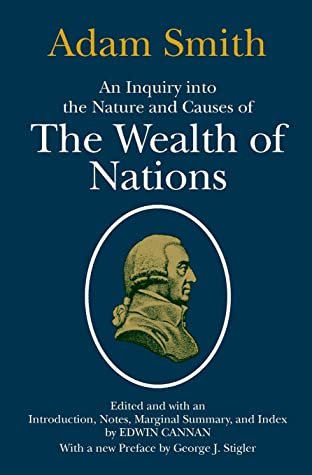 Adam Smith’s masterpiece, first published in 1776, is the foundation of modern economic thought and remains the single most important account of the rise of, and the principles behind, modern capitalism. Written in clear and incisive prose, The Wealth of Nations articulates the concepts indispensable to an understanding of contemporary society; and Robert Reich’s Introduction both clarifies Smith’s analyses and illuminates his overall relevance to the world in which we live. As Reich writes, “Smith’s mind ranged over issues as fresh and topical today as they were in the late eighteenth century–jobs, wages, politics, government, trade, education, business, and ethics.”